Olivia shares her psoriasis journey including her 'worst skin flare up' just before her 23rd birthday, finally getting referred to a Dermatologist, and seeing promising results with UVB light treatment. 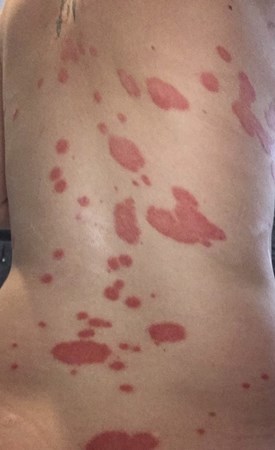 I have always had psoriasis since I can remember. I remember being in secondary school and having it so bad on my face, but first thinking it was acne and my mam buying all these acne soaps and creams which, looking back now, only made it worse.

I also had it really bad in my scalp. Well I say ‘had’ - I still have it quite severe in my scalp now, but being so young and not having the correct diagnosis was very stressful. My skin on my scalp would get infected very easily and it was awful having to go into school with yellow, flaky skin around my forehead and in my scalp.

Just before my 23rd birthday I had what I can only describe as the worst skin flare up I could (and hopefully will) ever have in my life. Literally my skin changed overnight. I woke up with tiny dots over my arms, hands and stomach. I work in a hospital so thought I had caught something from a patient. I went straight to my doctors and they thought I had a hair follicle infection.

3-4 days of taking antibiotics made no difference so I decided to go back to see a different doctor who then told me the devastating news that I had guttate psoriasis which should clear in 4-6 weeks. All I had to do was keep my skin moisturised. I found this information to be an absolute lie!!

As the days, weeks and months continued, I became more covered in these horrendous, ugly-looking dots and they were starting to get bigger as well. The itch was unbearable and I became very low and depressed. I reckon I spent about £300 on things I’d seen people use online who have the same condition and they were completely healed. Nothing helped! Turmeric capsules, probiotics, covering my full body in coconut oil, sea salt baths, going gluten and dairy free. I even ordered a cream from Germany, I think it was, and that didn't help. 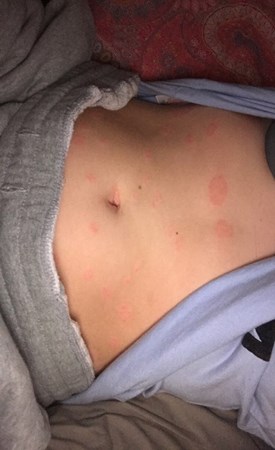 Eventually I got referred to dermatology. My appointment came through for June and we were in March! There was no way in hell I could physically or mentally wait ‘til June. Thankfully, with my amazing mam ringing every day to see if there were any cancellations, I got an appointment in April.

I was that low that even going to this appointment and being told I was going to start UVB light treatment at the time made me feel no better. I just thought ‘I had tried everything, why was this going to be any different?’ However, 4-5 treatments down the line I started to notice a difference. I could not believe my skin was changing before my eyes. These little dots were still on my body but they were no longer as thick to feel and the redness was going.

I am now on my 13th UVB light treatment and I'm a completely different person to that lost woman I was in March of this year. I hope this message lets people who are in the midst of suffering with psoriasis at the minute, or in the middle of a bad flare up, know that it will pass - I promise! And try not to push anyone away who just wants to try and make it better for you. Let your family love you because we all deserve it!