Despite not yet being 2 years old, Mabel has been living with psoriasis for some time. Her parents, Jacqueline and Ian, tell us about Mabel's journey so far, and how she's kept smiling throughout. 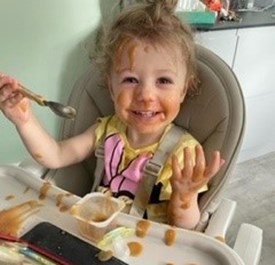 Mabel has suffered with post viral rashes since she was 3 months old. Every time she caught a virus a rash would appear and fade as she got better. Just before her first birthday she caught COVID-19. Not long after little blisters appeared on her skin. It looked like chicken pox. The blisters only appeared in small areas and developed into what looked like a mix of impetigo and burns. We brought her to A&E at Alder Hey due to a very high temperature, where she was seen by lots of different specialities. A number of diseases were ruled out and, as the rash was still present, she was then seen by the Dermatology team. 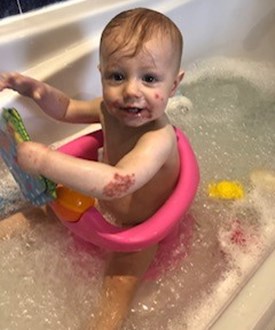 It wasn’t an obvious diagnosis so she had to undergo a skin biopsy in October 2020 under general anaesthetic. We were given the news she has psoriasis. Whether this is related to having COVID-19 or merely a coincidence is unknown and we will never know for certain.

We have been told that she is the youngest patient her consultant has ever seen with this. It has been absolutely relentless. During bad flares we have had to go to Alder Hey for her to be bound in bandages on all four limbs three times a week. Seeing her go through all of this has been absolutely heart-breaking for us and we’ve felt every kind of emotion, but found great comfort in how she just gets on with everything. 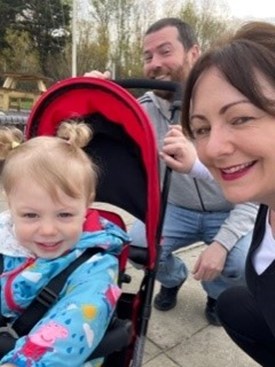 She was referred to the ENT surgeons for a tonsillectomy as the tonsils can harbour bacteria which can contribute to the exacerbation of psoriasis. When she was reviewed by the surgeon she was also identified as needing an adenoidectomy and audiology and ophthalmology review. She had the surgery and had a tonsillectomy, adenoidectomy, bilateral grommets inserted in her ears and ophthalmology surgery at the same time.

Unfortunately for Mabel the topical steroid treatment and wraps are no longer working so she has now been started on immunosuppressant medication: Methotrexate. For us as her parents knowing she is now immunosuppressed is a massive worry, and we have to be extra careful if she exposed to the normal childhood illnesses such as chicken pox as this can be extremely serious for Mabel. 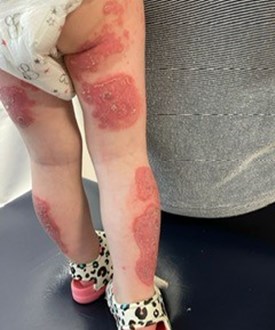 We worry for Mabel, as now she is getting bigger she is able to see her plaques and points them out to us and says “boo boo”. We tell her she has special skin, and try and ignore the stares she receives from people. When she has a bad flare she looks like she has been burnt and it’s been extremely distressing for us to see her this way.

There are a lot of unknowns with Mabel and how she will progress and respond to treatment for this condition, which is potentially lifelong, but that doesn’t stop her. She is a thoroughly delightful and happy baby who absolutely loves looking after her baby dollies, by feeding them and putting them to bed :) She is also currently enjoying shouting “Hiya!” And “See you soon!” at strangers! 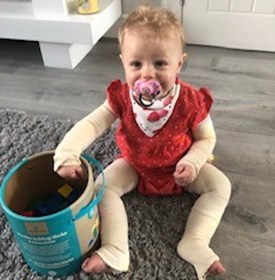 Mabel has been learning Spanish and British Sign Language since she was 10 months old and is absolutely thriving in both of these areas. Testament to her and her unwavering character and fantastic attitude. She turns 2 years old in August and in her short 2 years she’s been braver than most. She is always smiling and nothing gets her down. She is quite simply our hero.

We hope to raise awareness of this brutal chronic condition by sharing Mabel’s story, and we hope one day a cure can be found.

The PIF TICK is the only UK quality mark for trustworthy health information.

More than Skin Deep report gets a Parliamentary launch

The event followed the report's publication in February 2022, and helped bring it to the attention of MPs and Peers.