Rachael has been living with plaque psoriasis since she was 15 years old but experienced guttate psoriasis for the first time last year. In her story she shares her experience of coping with the condition and accessing treatment during the pandemic. 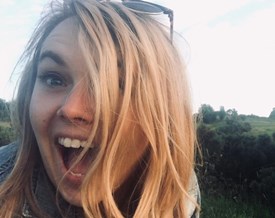 I’ve lived with plaque psoriasis for half of my life. I can’t remember how I felt when a large patch suddenly appeared on my leg at the age of 15, but it was definitely triggered by stress. I’m a very positive person, but I’m also a big over thinker, so you can imagine, there’s always a patch or five across my body. They’ve always been manageable, developing mainly on my lower legs, elbows and behind my ears. It’s part of me and I’ve been comfortable with my psoriasis for many years, that was until I developed guttate psoriasis. 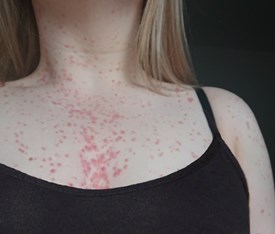 During the global pandemic, I happened to catch a different virus. It was just a mild sore throat and a temperature at night for a couple of days, but it sparked something. Slowly, a rash appeared across my body. It was a very hot August, so at first, I thought it was a heat rash on my thighs, but then it continued to spread from my neck to my toes. It began to look like an allergic reaction, I had just started using a new cream, so I thought it would pass, but it didn’t and the rash turned patchy. Sending my GP pictures, they confirmed it was guttate psoriasis. I was devastated, I was at the beginning of a new relationship and it was my best friend’s wedding less than a month away. I was just prescribed steroid cream and referred to the community dermatologist. After a telephone conversation, I was deemed too severe to be treated by them and referred to the hospital, which had a 40-week waiting list. It was an extremely difficult time being on the waiting list, I know we were in a pandemic, but I just wanted someone to physically examine me and tell me everything was going to be ok. 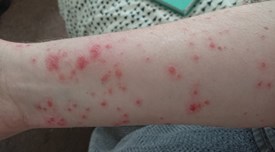 I was lucky at first, cream helped my arms and chest, and the patches were barely visible on the wedding day, but they constantly flared up and down. To try and uplift my spirits, I searched for help and began following the Psoriasis Association on Instagram. Just knowing they were around for support with their posts, helpline and community, helped me get through. Psoriasis Awareness Week really helped as I learnt more about my condition. 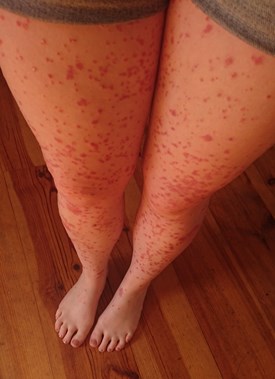 By the end of November, the condition had led to other skin issues appearing and scratching at an inflamed patch on a benign cyst led it to flare up and become a growth on my neck. I had finally been contacted by the hospital after pleading with my GP for help to be seen sooner and my first phototherapy session was days away. I ended up being split across two different hospitals which was very tiring, but I was so happy I was finally being seen. The cyst was fine, and it finally went down after Christmas. My phototherapy sessions continued three times a week until the end of January when I finally got my body back. I hadn’t been completely psoriasis free since that first-ever patch appeared. It was amazing and strange. Already a little patch has slowly crept back. I knew it wouldn't last forever, and that’s ok with me. I just hope that I never get guttate again.