Shantella has tried many treatments over the years to manage her recurring guttate psoriasis, including topical treatments, UV therapy, and diet and lifestyle changes.

My name is Shantella, I’m 26 years old and I have suffered with psoriasis for over 14 years.

My first outbreak was when I was just 12 years old. I initially came down with a strep throat infection before I then started to notice unusual red spots appearing all over my body. At just 12 years old I had no idea what had caused this, so I visited my GP who told me he would need to refer me to a dermatologist. It was at this point that I was diagnosed with guttate psoriasis.

As the years went by my psoriasis never cleared up as I was getting numerous throat infections which was flaring up my psoriasis. After numerous visits to my GP, I was put forward to have a tonsillectomy, it was hoped this would put my guttate psoriasis at bay.

After having my tonsillectomy, I had such high hopes that it would keep my psoriasis from flaring. However, unfortunately this wasn’t the case and it just kept getting worse.

Over the period of 14 years, I have had just short of 20 creams prescribed; over half of which being steroid based, none of them were successful. The next step was UV treatment at the hospital, which I had to attend three times a week.

Unfortunately the UV also failed so my dermatology consultant recommended that I start taking tablets orally for my psoriasis, which initially helped and cleared my skin up over 90%. However, I soon come to realise that this was short lived, only lasting a few months before my psoriasis came back with a vengeance. 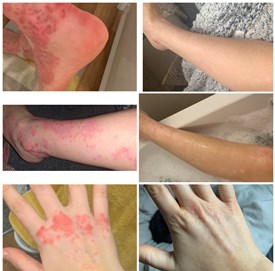 After trying all of these routes and them failing, I decided to try out herbal/natural remedies with a change of diet. I tried this for around 3 years but nothing seemed to keep my psoriasis calm, so I went back to the dermatologist and explained my journey.

Thankfully my dermatologist could see how much this had affected me and we worked together to come up with a solution. I am now prescribed Cimzia injections which I have been on for the past 6 weeks, and finally I am nearly all clear of psoriasis (fingers crossed).

I am sharing my story so that younger girls can relate. I know just how hard it was to be in school with psoriasis; having to cover up certain parts of my body, feeling left out and missing out on all the things that I didn't feel comfortable joining in with. I never really opened up about my psoriasis when I was young, which I then found affected me in my older years. I want other girls to know that speaking to someone really does help and that there are options available.