In this anonymous story our author explains their journey working their way thought the psoriasis treatment pathway, from topical (applied to skin) treatments to biologic medication. 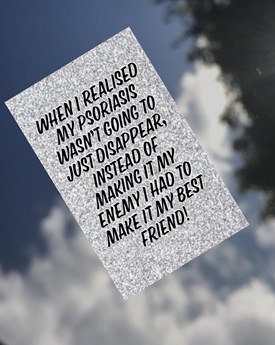 I've tried most things from creams and ointments, to light treatment (UVB and UVA), to oral medication (tablets), to biologic medication (injections).

I first noticed signs of psoriasis about 6 years ago. Small blobs of dry skin started to form on various parts of my body. Initially I went to my doctors and was given some creams to try. The creams and ointments have never worked for me! As a child up until this point I had very clear skin, not even a spot in sight, so to see these patches forming was a massive shock. My psoriasis got worse by the day and was becoming painful.

At this point I was referred to the dermatologist at my local hospital. I am still under their care today. Various assessments of my skin were conducted, they felt intrusive and uncomfortable. I was in my early teens at this point so being in a hospital was the last place I wanted to be.

For about another year I was given different creams and ointments to try. I have plaque psoriasis and it was everywhere, on my arms and legs from top to bottom, on my back, on my face, behind my ears, in my scalp, it was even on my hands at one point. Being a teenager in secondary school this was the last thing I wanted.

After all the creams and ointments did nothing, they recommended I try UVB light treatment. I did this three times a week for a number of months. As you can imagine it was very draining, however it did work to a certain extent. My skin got better and what was thick plaques turned into red marks which weren’t painful. Eventually I was told to come off light treatment and at this point I thought I was cured. I was so wrong. After a few weeks it came back very bad again and in places it wasn’t before.

A number of months passed and I was told to try UVA light treatment. I tried this too. I was extremely sceptical however I was prepared to try anything to relieve the pain. My skin was so bad I’d have to change my bedsheets sometimes daily because my skin would bleed. I had to get dressed in a separate room for sports at school. All of this put together was mentally and physically draining.

UVA did work a lot quicker and I did this for many months too 'til my skin got better. Again, the same thing happened once I stopped treatment, my psoriasis came back again. At this point I did not want to go back to the hospital however I was encouraged to go and it was suggested that I start methotrexate (tablets).

I was on methotrexate for about a year, however the side effects at this point were becoming severe so I came off it. For months I was medication free, however in a month or so my skin got worse and worse as I was not treating it. At this point I had done my GCSEs and was starting my A levels. I had to wait for my skin to get to a certain stage before it could be ‘assessed/graded’ again. Personally I found this very dehumanising as they were measuring my pain to a number on a page from what they could see.

When my skin got severe again I had to fight for something other than oral medication as I did not want to go back on medication that made me unwell. I was still classed as a child at this stage so a lot of medication was age restricted. Eventually they agreed to let me start Humira and self-inject. Although this may seem scary I was at the point of giving anything new a try as I had fought for years already. I am still currently on Humira and it works very well for me! It has been a life saver; my skin has become clear with just a few patches remaining! I still have check-ups and regular blood tests with the dermatology unit.

One thing I would say to anyone is don’t let your psoriasis defeat you. It is draining however you have to fight for what you feel you need! Despite the challenge of living with psoriasis I have achieved a lot. I passed all my exams and am studying at university now, so you can still achieve; you have to want to though!

Sorry this is long but my journey has been long and I’ve tried so many things! I hope you can gain something from me sharing my story!