Having had psoriasis for 20 years Janine shares her story and how she found relief through exercise, including running two half marathons in support of the Psoriasis Association. 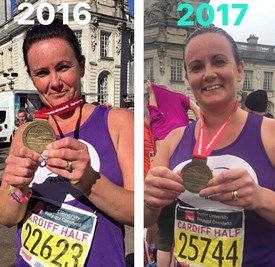 I was diagnosed with psoriasis at the age of 22 during my 1st pregnancy. When I first went to see my doctor I was told it was chicken pox. Two weeks later I returned and my usual doctor had returned and I was diagnosed with psoriasis. Treatment during pregnancy was difficult and it got much worse. My problems were scalp psoriasis, and plaque psoriasis on my knees, hands,  elbows and a few other places, along with nail psoriasis.

I have always worked since leaving school and most people I have worked with have been understanding of my condition but others made comments and remarks which have been upsetting. One day I put fuel in my car and went to pay and the cashier said ‘what’s wrong with you, is it contagious?’ and then pulled her hands away and I had to slide the money for payment while she reluctantly touched it.

I always enjoyed swimming, and was keen for my children to develop this life skill at a young age but eventually I gave up taking them swimming locally and enrolled them in swimming lessons as I couldn’t face people staring or asking if I was contagious, and sat and watched while my husband took them swimming. Swimming for me was something that only happened on holidays, and then I would get stares. 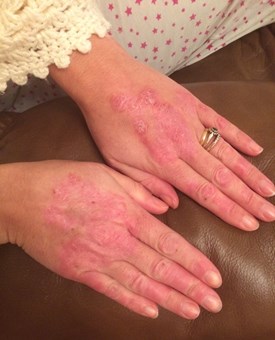 During my 3rd pregnancy (sadly I had a miscarriage on my 2nd pregnancy), my psoriasis cleared. Unfortunately after a few months it reappeared and gradually got worse. Again, I tried all the lotions and potions. When nothing else worked I was prescribed methotrexate in 2015 but this didn’t work and I suffered side effects including hair loss, headaches and other problems.

Being quite run down, I decided I needed to escape to the sunshine – this had always helped in the past, even if it was short term. We booked a last minute escape to Gran Canaria from the UK. Our daughter became friends with another girl from the UK, and I got chatting to her Mum. She asked me had I ever tried looking at nutrition and exercise?  During 18 long years this had never been suggested to me (We are now best friends).

I changed my diet (which included using some supplements to aid deficiencies I have) and also found what seemed to trigger flare ups (by keeping a food diary) and experienced an improvement in my skin, and also benefitted from losing weight. I was able to start exercising and soon my skin and weight significantly improved.

I began a couch to 5k program with a friend and after 8 months ran my 1st ever half marathon in 2016 and raised money for psoriasis. I also did the Cardiff Half Marathon again in 2017 proudly wearing my psoriasis vest.

My skin is still clear 3 years on and with the same friend (Kathryn) I have developed an award winning fitness group for women and girls and now help lots of people to be physically active. We have a couch to 5k group, 5k +, light exercise class with chair based movements to music, a boot camp session, and children's gymnastics. All because I feel better and because exercise has been very significant for me.

I actively raise awareness of psoriasis and the other issues that can be caused by it and will continue to support Psoriasis UK .