Janine, who shared her experiences of psoriasis with us back in 2018, gives us an update on her psoriasis and how maintaining an active lifestyle has helped her to manage her skin. 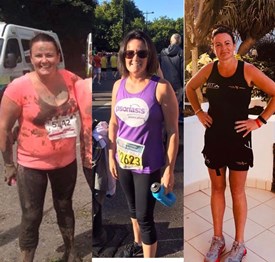 My name is Janine Price, I am 45 and happily married with a son & daughter and live in Wales.

I was diagnosed with psoriasis at the age of 22 during my 1st pregnancy having never had any childhood or teenage skin issues.

I had never heard of psoriasis and didn’t know anyone with it. We didn’t have google back then and found there was little information & support.

Treatment during pregnancy was difficult and it got much worse. My problems were scalp psoriasis, plaque psoriasis on my knees, hands,  elbows and a few other places, along with nail psoriasis.

I always enjoyed swimming and was keen for my children to develop this life skill at a young age but eventually I gave up taking them swimming locally and enrolled them in swimming lessons as I couldn’t face people staring or asking if I had something contagious. Swimming for me was a treat I only enjoyed on holidays.

During my 3rd pregnancy (sadly I had a miscarriage on my 2nd pregnancy), my psoriasis cleared and I thought I was cured and free of Psoriasis.

Unfortunately after a few months it reappeared and was much worse and I also began to suffer from psoriatic arthritis. As a result of both I became less active due to pain and discomfort but also because I was beginning to hide away.

I tried all everything prescribed or suggested as I was desperate, but nothing helped.

Dermatology suggested Methotrexate which is a chemotherapy treatment and I declined it.

A few months later as my quality of life was not great I decided to give it a go in 2015.

I suffered side effects such as hair thinning, headaches & nausea.

The treatment failed and I was left with very red patches of psoriasis and feeling sorry for myself.

I booked a last minute holiday to Spain and on that holiday I met a lady who suggested I improved my gut health and recommended some natural products which included aloe Vera.

She also recommended physical activity and to begin with baby steps as I was inactive.

When I returned home I changed my diet and introduced aloe vera and started to learn more about gut health.

Very quickly I began to see an improvement but was sceptical as I had seen treatments such as steroid creams work for 3 months and then you would have to move on and try another treatment.

Much to my surprise and happiness within 3 months my skin was clear of psoriasis and I had also began to lose weight.

Feeling much better I began the couch to 5k program, which I absolutely enjoyed and highly recommend. 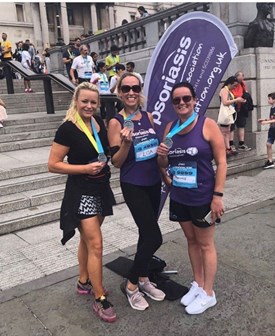 After completing the program I went onto enter 10K events and half marathons for the Psoriasis Association and help raise funds and awareness.

Thankfully today there is much more information and support available that there was in 1998 and the Psoriasis Association has many resources including an excellent Facebook Community.

5 years on, living through a pandemic and losing my dog - my skin is still free of psoriasis, I’m over 3 stone lighter 26 inches smaller and medication free.

I remained active through lockdown and maintained a balanced diet supported by supplements to support the deficiencies I have, including vitamin D.

The baby steps that started my fitness journey became habits and these certainly helped me cope through this difficult year.

Hope this helps someone.