Lee was diagnosed with psoriasis whilst in secondary school and 10 years later developed psoriatic arthritis. He shares his experience of finding relief in exercise as he plans for his next half marathon. 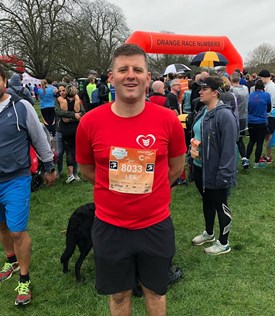 I'm 38 years old, this is my psoriasis story.

I've had psoriasis since secondary school. It started with small patches but before long I was covered from head to toe, including fingernails and toenails. The doctors gave me creams but they never really helped.

10 years later I started getting pains in my feet to the point I could not walk down the stairs without struggling. I went to the doctors to be told it was gout and given medication for it.

A couple of years later I moved to a different area and had to change doctors. The pains in my feet hadn't changed so I went and spoke to a doctor who specialised in skin problems. The doctor referred me to the arthritis clinic at the hospital. The doctor looked at my joints and feet and said “yes you have psoriatic arthritis”, and started me on a drug called methotrexate. This meant having blood tests every two weeks because of the side effects, but they were affecting my liver and kidneys so they stopped them and moved me on to a drug called sulfasalazine, but I had to stop them because the orange dye kept on giving me bad headaches. 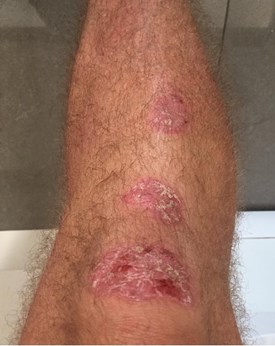 Then I went to see another doctor who said try and lose a bit of weight, it will help with your arthritis, so I joined a bootcamp (@cambsbootcamp) and have lost 2 stone so far. I was then offered funding for Etanercept (Enbrel) injections. Within months my arthritis and psoriasis disappeared.

At the moment they have moved me onto Humira because my psoriasis flared up, but it has made my arthritis a lot worse so they are in talks about moving me onto a new drug.

Exercise does help - so far I have run a couple of 5ks, 10k and a half marathon. Next year I am going to run another half marathon and raise money for psoriasis.