Aimee shares her psoriasis journey, from first being diagnosed aged 14 to developing psoriasis on her face after a recent flare up, and finding the strength to share her photos on Instagram. 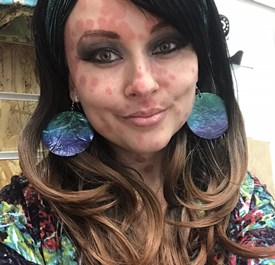 Hi, I’m Aimee Grace. I first noticed small patches of psoriasis at the age of 14. For the last 18 years my psoriasis has always been contained to a few small patches on elbows and scalp. Then in February this year, after contracting tonsillitis in early January, and after a good friend of mine hurting me and causing me a lot of stress, I began getting a few little spots on my forehead. This was initially diagnosed as chicken pox until 2 weeks later when the spots rapidly spread and I went back to my GP to be informed it was guttate psoriasis.

I immediately did my research when I got home and realised it was not too common on the face and I broke down. I am only 32 and single and the idea of looking like this for the foreseeable future was gutting. I felt ugly. Who would love this face?!

My psoriasis is all over my body and face, it affects some places more than others. My skin is constantly burning, itchy and tight. To some people psoriasis seems so trivial but it isn’t, it's agonising and uncomfortable and I can totally understand why some people struggle with mental health issues because of it. 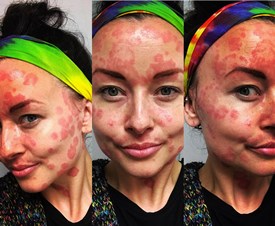 I was extremely lucky, after only a couple of weeks I found a strength in me that made me share a photo on my Instagram account. I knew I physically couldn't hide my face, so I had no choice but to face it head on! I couldn’t believe the kindness I received, so much support and love out there. Do not get me wrong, I’ve suffered horrendous abuse, including death threats, with some people telling me to take my own life. But the overwhelming kindness from 95% of people completely outweighs the bad.

Since then I have received many private messages from other psoriasis warriors who cannot leave the house and some who want to commit suicide. They tell me I have helped them to face their fears and stay strong. This is my calling, I just want to keep supporting others and helping them to battle through and find their strength. 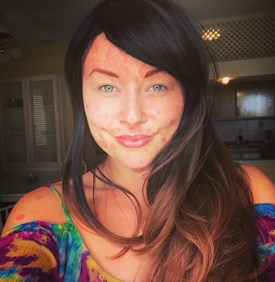 I have been extremely lucky when it comes to treatment. My GP overloaded me with prescriptions - I am currently using 15 prescribed ointments and lotions - so my amazing company offered to pay for me to visit a private doctor. 3 weeks later I’m in hospital being told that the waiting list even privately is 4-5 months, but due to the severity of my condition I have been moved to the top of the NHS list and start my light therapy next week! So after expecting to pay £850 and wait 4 months, it’s now free and next week! This makes me so happy. Fingers crossed!