Andy looks back on his 40 year journey with psoriasis, and how biologic medications have helped him to get his life back on track following a severe flare which saw him hospitalised. 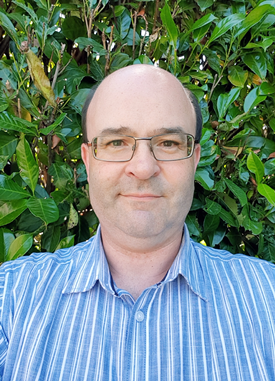 My name is Andy and I’m 52 years old. I was diagnosed with psoriasis when I was 12 years old. My psoriasis started as a small patch on my left arm. I was seen by a doctor for a few months before being referred to a Dermatologist whom confirmed the diagnosis. I was prescribed some ointments and creams and told to get plenty of sunshine on the affected skin.

As time passed, the creams became ineffective and several more patches appeared all over my body. By the time I was 16 years old I was very self-conscious and depressed. All my friends at the time were enjoying parties and beginning to have relationships. My life at the time had become very isolated and I had shut myself away from the world.

I remember my parents taking me to the seaside one summer. On the beach people stared at me and I became very upset. I locked myself in my father’s car and refused to come out. At home I would cover up all my affected skin and stay in my room. All my school work suffered and I argued with my parents regularly. I became very lonely and isolated.

I was given another appointment with a Dermatologist. This time he discussed the use of oral treatments to reduce the skin coverage. I began taking the medicine and for a few years my life seemed back on track. I was able to get out more and started working for a company that sponsored me to return to college.

Life at this time was much better. I enjoyed my life more and began going out and socialising. Then early on in my twenties I experienced the first of many severe flare ups. I began intensive cream treatments daily and the oral medicines were increased.

I was working in a hospital at the time with long shifts and difficult work. I met someone and for the first time was enjoying being in love. Then one day I woke up and I was feeling very ill. I had to take time off work and go for various tests. It was decided to stop the oral treatment to give my body a break.

The result then was a massive flare up with 80% of my body covered in psoriasis. I had a fever and my body temperature increased. The psoriasis became inflamed, scarlet red and very sore. I collapsed and was admitted to hospital as an emergency patient.

I was to remain in hospital for 3 months while the doctors tried to stabilise me. I lost my job and eventually my new relationship ended. I became extremely depressed and angry with my life. The result of this was to be the first attempt to end my life.

I did eventually stabilise with a lot of medical help. My life then became an endless cycle of topical and oral treatments. I did manage to return to work for a while. But I ended up needing a lot of psychological treatment and my medicines needed reviewing regularly. The strong medicines eventually damaged my liver. I still have to visit a liver doctor yearly to check on the status of the damage.

I was able to work for a long time until I collapsed at work one day. I had been experiencing a lot of joint pain and extreme tiredness at the time. I thought I had picked up flu bug. But this episode was to last for several months. I was eventually so bad I took to my bed and remained there for two years. I was referred back to the hospital several times before a Rheumatologist diagnosed I had psoriatic arthritis.

None of the oral medication worked and, after losing my job, I became unable to work. I had periods of time when I was better but no one would employ me. After about 200 employment rejections my depression returned and I became isolated again.

After a few exhausting years of struggling, I was finally accepted to try a new treatment. I began using biological treatments which gave me a better quality of life. I experienced many side effects and a lot of exhaustion during this time.

I used to hate psoriasis and psoriatic arthritis. They have made my life very difficult and often unbearable. But more modern and effective treatments have eased my burden. I still have plenty of bad days but I have become much stronger in my mind. A great turning around point for me was to eventually realise that I can love and accept myself with this condition.

The Psoriasis Association has reached 50 years old on its mission to tell the world all about psoriasis. It has achieved great things along the way. I’m glad it still exists to promote a much better understanding of this awful condition.

This is my story about living with psoriasis for nearly 40 years. I hope by telling my story it will give those that read it a better understanding of what it is like to live with psoriasis.