Ellie found learning to live with the challenges of psoriasis difficult throughout her teenage years, but has since come to accept her skin and embrace her 'leopard spots'. 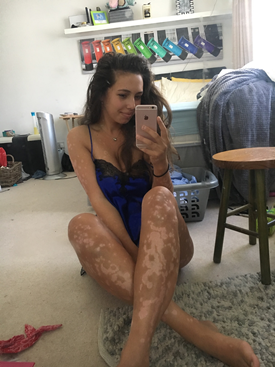 Being a teenager isn’t easy. The ever-fluctuating frustration around your own changing body and how it fits in with the world around you is enough to discourage anyone from healthy self-esteem. This frustration is elevated beyond reproach when you develop psoriasis at a young age.

My own journey with psoriasis has been testament to this. Having recently entered my twenties, for the first time in my life I am accepting of myself not just in spite of my skin condition, but because of it. In my teens however, I was plagued by insecurities not just about the way I look, but about how people would think and speak about me. I remember the first time I ever revealed my skin in public having just turned thirteen, on holiday with my dad and brother. With the blazing sun on my cardigan-clad, psoriasis ridden body, I plucked up the courage to whip off my outer layers to get some sunshine on my skin. Not two minutes had passed before a concerned looking member of hotel staff approached and asked if there was anything he could get me for “that” (pointing at my white, scaly legs). Obviously, the man was just trying to be helpful, but that self-deprecating voice in my head exploded into a cacophony of self-consciousness and anxiety. I grabbed my clothes and rushed back to my room where I stayed crying the rest of the day.

The fact is of course, that more often than not you over-sensationalise your condition. The number of people that have told me they’d never even noticed my psoriasis, despite being racked with my own self-consciousness is quite staggering. The problem is that in a society where you are constantly judged for what’s on the outside, you never really stop to take care of yourself on the inside. Ever since I stopped obsessing over every single sideways glance and ignorantly phrased comment, I’ve been able to channel the negative thinking into something more positive. I’m slowly becoming able to wear short-sleeved shirts or shorts without obsessing over my skin being on show; or able to stay in the gym for an entire session without running out because of how irritated my skin looks. 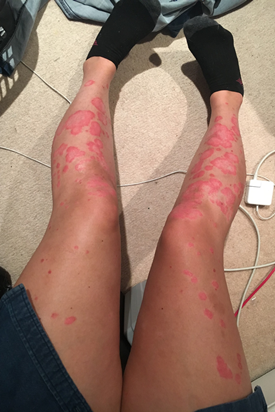 If I had one piece of advice for my younger self when my condition initially broke out, it would be to not let the fear of what people may think of you stop you from taking risks and doing what you want to do. If I could impart one goal to anyone suffering with psoriasis who still struggles with that little voice in their head telling them to run away, it would be to channel your frustration into a more positive outlet. For me, writing about my problems and how I was feeling helped me to understand and deal with it more easily. This journey is a long one, with lots of very itchy twists and turns, but however long it takes for you to finally start accepting yourself along with your #LeopardSpots, you will be a more resilient person because of it.