Erin's mental health suffered as a result of her psoriasis throughout her teenage years. Now, at 18, she wants to help others who are going through similar experiences. 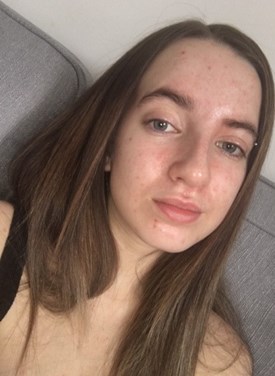 When I turned 12 that’s when I noticed spots red appearing on different parts of my body. I went to endless appointments for a diagnosis as time went by I was taking home 2 big bags of steroids and creams just for these tiny spots I never knew anything about. Eventually I got diagnosed with Psoriasis...

My first initial thought was I have no idea what that was because I was so young. The worst part was there was no cure! After years of going to children’s hospitals and dermatologists I kept receiving the typical steroid which I’ve been using for years, it thinned and irritated my skin so much that even clothes burned when I wore them.

As I became a teenager it began to cover every part of my body, even in hot weather I would wear jumpers and jeans. My mental health deteriorated and my confidence continued to lower itself. At 17 I finally got offered an alternative treatment at Addenbrookes hospital, they were caring towards my situation and offered me UVB light therapy. It cleared my skin straight away!! But it started coming back after a few months...now I’m 18 and I’m finally starting to accept the way I am! I realised more people were in the same situation as I was and it inspired me to want to become an advocate for Psoriasis.

I’ve become vegan and letting my skin have air and sun light. I feel there should be more awareness because it’s a daunting disease there could be more people out there hiding themselves from the world! My advice to you is to open up about your condition, tell people, tell your friends and family more people around you might have it too! If you need advice my Instagram is erinmelissa18.

Details of our 2021 Annual Conference and AGM taking place on Saturday 19th June, including our packed agenda for the day and how to register for the online event.

Information for people living with psoriasis and psoriatic arthritis, including those taking immunosuppressive medicines.