Having had psoriasis for 18 years, Han is tired of feeling as though she can't wear what she wants in order to hide her skin. Here she tells her story and why she is determined 2019 will be the year she embraces her psoriasis. 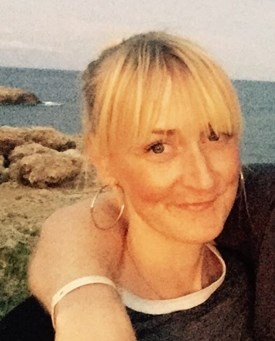 Click to enlarge
Hey, I’m Han and I have psoriasis.

My psoriasis started around 18 years ago when I noticed little red spots on my torso. I was 15 at the time and surprisingly open about it, often telling people about it before they’d even had the chance to notice. 15 is such a tough age to navigate let alone with a newly formed skin condition that no one had heard of so I think it was a defensive mechanism so that people would understand.

Whilst I was at school it stayed in areas I was able to easily hide; mainly my torso or scalp. I found a Chinese shampoo that was great for it and kept it really manageable and I tried steroid creams too. I had amazing results from these creams but I definitely hadn’t done my research on them, using them for too long so that it felt like it became almost resistant to it.

So I decided to search for the magic cure, confident one day I’d find a solution that would make it disappear. Herbal drinks, acupuncture, more Chinese creams, no dairy, veganism, juicing. I was convinced that medicine wasn’t the answer and that it had everything to do with my lifestyle or eating habits. As you’ve guessed, nothing worked.

The past 7 years have been the happiest in my life, meeting my amazing fiancé and having my now 2 year old son, after never being truly sure I’d be happy again after the loss of my mum. But for my skin it has definitely been my worst. 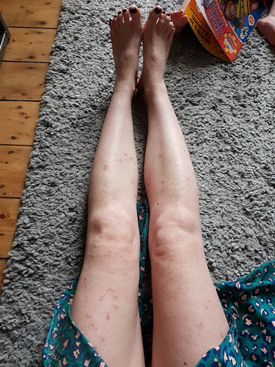 I now have psoriasis over much of my body; scalp, arms, torso and legs; some days I’m a walking snow storm! But at least I’ve got something in common with Kim K now hey?! Until 3 months ago I had resigned myself to that being my lot in life. But I’ve started to notice that it’s changing me and I’m not willing to let that happen anymore.

I don’t parade around the pool on holiday; I wear very modest swimsuits and keep a t-shirt on even in the pool. I have to think every day about what to wear so that I don’t show my arms or I don’t show my legs in summer as I’m too concerned over what people will think. I see people looking at my skin. Little glances at the supermarket or playground. I have heard people say my skin is “minging" and I’ve had people ask if I’ve been ravaged by mosquitos.

But enough is enough. I’m fed up of not wearing what I want, for it holding me back. Little by little I’m starting to accept that it’s me and people can look. Being so open and writing this is super scary but it's step one. Shorter summer dresses is step two. And closely behind: swimming. Eek. I’m also starting on my medical journey again, with a hospital appointment in the next few weeks!

2019 is about embracing this flaky, itchy skin that I’m in.