Jess shares her experiences of psoriasis from body bandages and midnight baths as a child to dealing with stress-induced flare ups later in life. 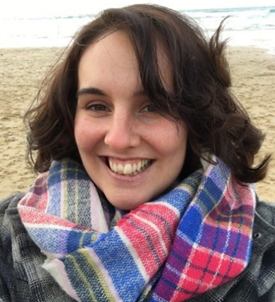 I was first diagnosed with psoriasis at four. Thinking about it now, it’s hard to differentiate between what I actually remember about that time and what I have since been told.

I was diagnosed as a chronic sufferer and my mum remembers that the nurses at the John Radcliffe Hospital in Oxford, where I was later referred, told her that I was the youngest patient they had dealt with at the time and one of the youngest sufferers of psoriasis, not just in the county, but the country.

My earliest memory of psoriasis was the conversation my mum had with the GP after the first treatment we tried was having little effect and my mum tells me that the cracking on my feet was so bad and painful, I couldn’t walk.

I do remember being given an illustrative book about Kimberly and her body bandages, which described exactly the treatment I was undergoing. They used coal tar, which at the time I was diagnosed was the most common treatment for psoriasis, especially in very young patients. It’s a thick, heavy and oily substance that’s smeared over patches often before bed and I then wore body bandages overnight – man it was hot!

I’d often wake in the middle of the night demanding a bath in Balneum Bath Oil, still an essential tool in my psoriasis management arsenal (the oil, not the midnight baths), in order to wash off the coal tar. Five-year-old me thought this was a great laugh – late night dips in the tub, less so my parents.

This process was repeated for several weeks, but was quite distressing for my younger self, as the ointment would burn harshly – so back to the dermatologists we went. Turns out I’m allergic or have a severe intolerance to Coal Tar – the number one treatment for psoriasis, some irony there, and have been ever since. It does in fact just irritate my patches rather than soothes and you’d be amazed how often it crops up in cosmetics – particularly soap and hand cream.

Anyway, this started my long journey with topical steroids. I had a two-week spell of day visits to the dermatology ward at the JR, where my mum learnt all about how to treat my condition. Farewell to body bandages and hello emollients and topical steroids. This meant missing two weeks of school and my Mum brought endless craft kits to keep me amused during the spells between sessions with the consultants and nurses.

I also don’t really know what triggered my psoriasis, we think it followed a particularly bad cold and the condition does run in the family as my grandma had it. In fact, it was my gran’s experience that has probably shaped my own relationship with psoriasis. In her day, there wasn’t much to be done and she suffered terribly both physically and mentally.

The impression this had on my mum meant that we weren’t going to be slaves to this condition and my mum’s religious and diligent application of treatments has a lot to do with the good condition of my skin today. Soon, applying Diprobase from head to toe twice a day became as natural as cleaning your teeth – I think nothing of it now.

Over the last 25 years, I’ve used everything - emollients, oils, creams, steroids and shampoos. Plus, a whole raft of alternative therapies - daily chants, ayurvedic doctors - all suggested to help soothe my skin condition.

My psoriasis is definitely linked to my psyche, if stress levels rise so does the frequency of patches – taking A Levels, final years at university, stressful meetings - always lead to much larger surface areas of coverage especially down my legs and classic areas like my scalp, elbows and knees.

The scalp psoriasis was/is always the worst – it doesn’t matter what you do, it flakes and it looks like dandruff. I’ve had ‘better get some head and shoulders’ jibes since time began – but hey, I still wear black shirts and jumpers.

Most recently, my psoriasis has morphed from the larger forms to smaller tear drop shapes which are scattered over from head to toe and I’m getting it more on my face – especially on my eyebrows. I joke that I’m beginning to look like a Star Trek Klingon as it tends to get worse before it gets better. These days not many people realise I have psoriasis, apart from the face redness, I don’t have it in visible areas so much.

What people don’t see is the time spent every day applying my lotions and potions, it’s probably because of this that I can’t be bothered to put a full face of makeup on everyday – sleep’s more important to me! In many respects I was lucky to be diagnosed as a youngster – looking after my skin simply comes naturally to me and I’ve never really known anything else.

What I’d like to say to someone reading this, perhaps they’ve just be diagnosed, is that there is light at the end of the tunnel. Yes, it’s a pain and it can be life-changing, but often the overall changes you will make are for the better - whether that’s changing what you eat, exercise or the treatments (just think of all those non-psoriasis parts benefiting from that intense moisturisation!)

Jess blogs at The Weekend Tourist.