Laura developed psoriasis after the birth of her daughter Millie. In her story she discusses the challenges of treating psoriasis as a new parent and the impact of stress on her skin. 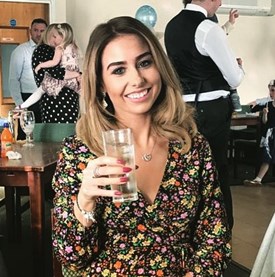 Hey, my name is Laura and I’m a twenty-six-year-old Hairdresser and Mum from Teesside. I was diagnosed with psoriasis when I was twenty, as far as I can remember it all started after giving birth to Millie, who is now six.

I have been dealing with psoriasis throughout Millie growing up. It started off in tiny, small plaques around my body which weren’t very noticeable and didn’t really bother me. I was still confident doing everyday things with Millie and, in the earliest stages, it wasn't really affecting my quality of life.

A year went by and Millie was now one year old, I remember my psoriasis becoming more noticeable and I was becoming more self-conscious about my skin as the psoriasis began to develop on my face. I was becoming stressed about my skin and it was bringing me down. It seemed the more I stressed about having it, the psychological stress caused it to flare up even more. I also find that the winter months with the heating and the cold doesn't help, although I found myself constantly moisturising, it didn’t really make a difference.

Throughout the years the plaques began to spread, I noticed I would have a flare up at certain times of the month, but my psoriasis was becoming uncontrollable, it was beginning to affect my quality of life. I was referred to a dermatologist who then told me that it wasn’t a severe case and that he’d seen a lot worse. I went away being prescribed with more steroid creams, I felt disheartened by this because in my eyes my case of psoriasis was severe, and it was affecting me. As a job I am a Hairdresser and having to push yourself to stand in front of clients everyday not feeling confident about myself wasn’t great. Also, having to wear black clothes for work, I constantly had the white flakes on my shoulders from my scalp that I would notice having to brush them off all the time.

I went back to the doctors to be given more creams and shampoos for my scalp that didn’t seem to work. Having Millie to look after didn’t allow me the time to put these creams on at certain times of the day. I also followed diets and recipe books specifically for psoriasis, but being naturally thin I had to be careful with what I eat and that I don’t lose too much weight.

During this period, I was also well into the gym, but I would feel self-conscious about going to the gym without makeup as I liked to thicken my makeup on to cover up my psoriasis plaques. I refused to take my daughter swimming or even swim myself after the gym because I didn’t want anyone to see my psoriasis patches all over my body and I began to feel paranoid about people looking at me not knowing what it was.

Being a girl, I started trying new forms of contraception as I was starting to think added hormones were adding to the vast development of my psoriasis, as it began to get worse. I was noticing new plaques all of the time and it was becoming very painful, my skin would chafe against my clothes, and I could no longer wear deodorant under my arms because it would sting like crazy, making me feel more self-conscious about sweating. I spent a fortune on skin care trying to find something that would help control the redness, even googling about diet changes and how salicylic acid works as a peeling agent and acts as a 'scale lifter' softening the skin, helping to remove the scaly patches. 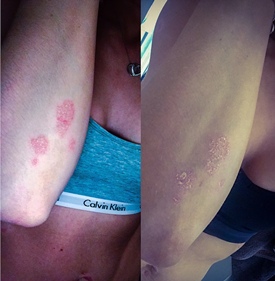 It finally got to the point where I was starting to feel down and anxious about my skin. I stopped seeing friends and going on nights outs because I didn’t want to wear a dress or a skirt or a short-sleeved shirt, anything that would show off my psoriasis. I was then referred to a dermatologist again, this time taking pictures of my skin on my phone to prove how bad my skin could get when I had a bad flare up. I also showed the dermatologist a picture of my skin without makeup, just so they would believe how bad it could get. Finally, they agreed to letting me have UVB treatment, and also I was prescribed ‘Enstilar Foam’ which I’ve never used before, I’ve found it’s been great for me and my skin has finally started to clear up after six years! The foam is easy to apply with it being in a spray bottle, and my confidence is coming back! It also cuts time on a morning because I can now feel confident enough to leave the house without makeup! I am so pleased that I can now feel comfortable in my own skin, I feel more relaxed about life and I feel like it’s a massive weight taken off my shoulders.

I really do hope this continues, and my psoriasis doesn't flare up as bad after the course of treatment has finished!