Marcelina was diagnosed with psoriasis in 2006 while living in Poland. Here she shares her experience of finding a supportive community and navigating a new healthcare system when she moved to the Netherlands. 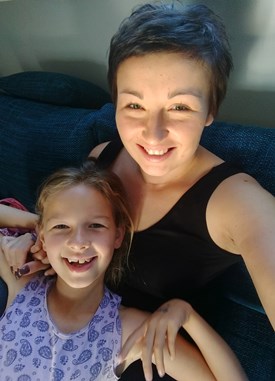 I first learned about psoriasis in 2006. Nobody in my family was ill. I knew nothing about this disease, nothing at all. I was in the course of a diploma practice which I had at ING Bank in Poland. I wrote a diploma thesis, I was finishing a serious relationship, the family situation was difficult - my parents wanted to go abroad. All at once.

The psoriatic lesion first appeared on my head. The first dermatologist I saw told me that it's nothing important and will pass. So I did not worry if it was "nothing important". The problem, however, got bigger.

After leaving the hospital, I could not wash the oil out of my long hair, so I asked my dad to cut it off completely. Razor to zero. Mama did not agree. I did not want to bother with daily lubrication, washing, lubrication, washing... And hair to the waist... I thought it would be funny, and it turned out that people said I had leukemia. I wore a headscarf because there were visible psoriatic lesions. My family were afraid that they would get infected from me. My grandparents did not know what it was at all.

After completing my diploma thesis I went to the same bank for an internship, and with them I associated my hopes for future work. After six months of internship, I signed a contract with ING in another city and moved there. A few days later, my parents went to the Netherlands. It was as if I lost them forever.

I went to a Polish organisation connecting people with psoriasis, thanks to which I started to meet other people sick like me. I went to general meetings of this Association - meetings, conferences - it turned out that I am not alone with this disease. I learned a lot about the disease, I knew all the traditional methods of psoriasis treatment, and I got used to the idea that it was incurable. I opened up, I started talking about it, also at work.

I still remember, a friend with whom we worked in the branch, seeing me drink from her cup - threw it into the trash, saying that she was abhorred. It was the time when we worked together with another person in a three-person team in a new branch. Then I lost my heart to this place. I could not work with people who disgusted me, but I did not have the opportunity to change branch. 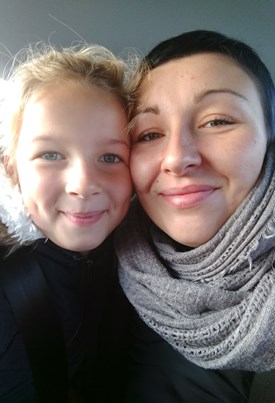 I returned to my parents' apartment during this period, so I commuted 40km daily by train. I started to have more and more problems with the disease, fast pace, stress at work, but there was no time to go to the doctor because I worked every day from 7am to 6pm, plus commuting. The bank's branch was located in the City Hall, so there were customers all the time, there was a constant queue, and the germs made me more and more ill. Psoriasis is associated with immunity, so I became ill more often, longer and worse each time. One time I was called to talk to the director. He said that if this is the case, he will not extend my contract. I was devastated.

Not long after, I received a phone call from the branch in which I had a practice and internship. They offered me an alternative passage. For me this was like something sent from heaven because, thanks to this, the road to work would take me 10 minutes’ walk. I started a new chapter and there was time to see a doctor during the week and not to have to look for someone in the evenings privately. Psoriasis, however, did not let go.

Every year I went to the hospital for treatment - two weeks hospital, two weeks post-abortive relief. For this "luxury" I had to wait until the end of September so that everyone at work could use their holidays during the holiday season. As a rule I could not sit down because my legs would stick. I worked in sweaters or suits all year long because my skin was cracking and bleeding, and the requirement of a white blouse didn’t leave me a lot of choice. Long sleeves were standard for me. I could not show customers the cracking and bleeding on my hands. Long pants regardless of the heat. Only I know how much time I put into my hair in the morning to cover all the changes on my head with hairspray. Camouflage to work on direct customer service was, for me, the basic activity that I had to do every day.

I hid psoriasis at work, but not among colleagues. Due to the annual hospital treatment, I told them what I was struggling with. They accepted me. I talked to them a lot about it, they were incredibly understanding. I never heard a bad word, only words of compassion. They were my second family. We kept friendly contacts also outside of work. I also had many friends with whom I worked in two other companies. Every second weekend we spent on training. And also friends from outside of work - friends for either simple or difficult conversations at any time of the day or night. I've never been alone.

I took care of my grandmother who lived with me. I took her on visits to the doctors, after a hip fracture and insertion of a pacemaker. She suffered from RA and diabetes, and I extended my time to the maximum. I lived fast, intensely, a lot. Everything was on time. My illness was secondary.

I did not care about psoriasis all the time. Until I felt good - it was good... I knew a lot about it, I accepted it enough that I talked about it openly when someone asked me what happened to my skin. I was not scared to live, I did not stay at home, I felt that people should learn about this disease. However, many absorbing activities allowed me to make only individual people aware of things that were "on the way".

There were more and more changes at work in the bank. The friendly atmosphere changed into a rat race, and my parents more often told me to move closer to them.

I left the bank hearing that I was making the biggest mistake of my life. I never thought so. Rather I felt that I was free from the gaze of other people, from my personal prison. I could not be myself. My daily work deprived me of a few hours of freedom, because I had to cover my body.

I went to the Netherlands in June 2014. I did not know any foreign language and I had to continue to heal myself. I studied the local health service from scratch, I asked people to go with me to a dermatologist. I started from scratch. Even the medical documentation from Poland did not matter.

I paid for the first six months in the Netherlands with a very bad mood. From the fast, happy, active life I suddenly fell into complete silence. I did not understand anything, did not say anything, I lived like in prison. I worked physically, mostly on night shifts, because my parents worked too, and in the day my daughter could not be alone (she was then 4 years old). I remember this time as sad and at the same time physically tiring.

I started the year 2015 by leaving my job. I could not live that way, and psoriasis was more and more resistant to standard treatment and more and more active. I spent a few months at home, regenerating my strength and skin. The institution that helped me financially offered me a job in a Dutch company, where I could only speak Dutch, so I listened for the first months, still not saying much. In the meantime, I've already learned to speak in English (conversations with people in a previous job helped a lot) so I was independent in dealing with doctors and research. In this work, I started to understand the Dutch language.

2016 brought me the first Dutch contract. I was proud to start work where I was appreciated and where I communicated with people freely. Psoriasis was treated pharmacologically at that time, no external therapies were used. I was also calmer. I had a permanent work contract. Finally, a normal life began, or so I thought...

In September 2016, all this stopped. I have been living with a diagnosis of psoriatic arthritis for 1.5 years. At that time I had thyroid cancer, asthma problems and psychological therapy.

I try to help other people. From the beginning of my journey with the disease I have been running a Polish support group for people with psoriasis and psoriatic arthritis. The group operates under the patronage of the Polish organisation, the Union of Psoriasis and Psoriatic Arthritis Associations, to help create a better way for people tomorrow.