Nakita noticed her first 'spot' of psoriasis in P.E. class at secondary school, here she shares her experiences and her excitement at finally getting an appointment with a Dermatologist. 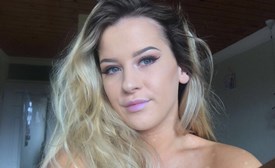 Hi, my name is Nakita and this is my psoriasis story.

I’ve always had something wrong with my skin, even from a very young age. I had severe eczema at the age of 3 and I can still remember the pain I was in when it was bad. Everytime someone touched me it felt like my skin was on fire. After a while it settled down and eventually went.

Later on in life when I started secondary school, I was in PE class when I noticed this dry red ‘spot’ on the back of my leg, so I ignored it and didn’t think anything of it. I then noticed that I had a few dry bumps on my scalp. The following week I noticed another one of these ‘spots’ appear, so I went to my mum about it where she then booked me a doctor's appointment. My doctor took a good look at my skin, diagnosed me with psoriasis, and gave me a steroid cream to try out, but then it rapidly spread from my legs up to the bottom of my back. At this point it wasn’t severe at all, it was only minor.

After a few months of applying the cream, my psoriasis settled down a lot but my scalp was still quite bad, so I went to the doctor's again and got prescribed shampoo and solution to apply to my scalp. Everytime my mum applied the solution I would scream the house down (not literally) - it felt like someone was squeezing lemon juice into an open wound. I can’t even describe the pain I was in. We went through countless bottles of shampoo and solutions but nothing ever cleared my scalp up so I just ‘sucked it up’ and carried on with my life like usual.

As you can imagine, having psoriasis in secondary school totally sucked. By the end of year 9 I was diagnosed with severe anxiety and depression, as well as trying to treat my psoriasis. It was hard but I kicked its butt and I pulled through it!

And then... in my first year of college the psoriasis came back, and it came back biting! I didn’t want to leave the house, I thought this is the worst I’ve ever had it. I did some research and people have said online that the sun/sunbeds have helped them, so later that year I started having sunbeds and I could not believe the result - after 1 month it had all practically gone! I can wear t-shirts again!!! So I then stopped sunbedding, and kept moisturising my skin so it didn’t go dry again, and it was all good for about 8 months.

I got admitted to hospital this January with septicemia due to an infection in my kidneys and it almost instantly came back. I thought it couldn’t be as bad as it was when I was in my first year of college, but boy was I wrong. I had never ever seen anything like this before. It was all over my back and there were a few ‘spots’ on my chest but nothing compared to my back.

I went back to the doctors after I recovered from having septicemia, and my doctor told me it has flared up because ‘my body has just gotten over a serious infection and infections can cause psoriasis to flare’. My doctor called it ‘guttate psoriasis’ (I didn’t even know there were different types of psoriasis). At this point she then gave me Eumovate cream to try, alongside more shampoo. I continued to use these as directed by my doctor but, a couple of weeks later, I notice it has started spreading and getting worse on my chest. I also notice that my face is now covered in red patches and dry skin. It hurt to even smile.

Yet again, I went back to my doctor and she gave me this magical cream for my face called Hydrocortisone. It worked wonders for my face, but you’re not allowed to use it for a long period of time so, of course, I eventually ran out of it recently and it has started to come back on my face again. I’m just hoping it doesn’t get as bad as it was again. My doctor also gave me this ‘foam’ called ‘Enstilar’ to try on my skin. It has slightly worked by calming it down but I have recently noticed that new ‘spots’ have appeared on my chest, neck, legs, arms and back.

When I first had psoriasis I never thought it would be this bad. I have tried so many creams over the past few years that I haven’t mentioned because I can’t remember the names of them, but only a couple have calmed it down. Would I say psoriasis has affected me mentally? Yes, 100%. I used to feel comfortable in my skin and I used to feel pretty when I put make up on, but now, no matter how much make up I put on, I still feel ugly. No matter how much foundation I apply to my skin, you can still see the psoriasis under it. I have massive white scars on my neck and shoulders from previous psoriasis outbursts, that people tend to stare at.

So what I have learnt is, don’t try and hide your skin condition - it is your skin and no one else’s! Sometimes I wish I could talk to someone else who understands me, and understands that going to bed with mittens on isn’t weird because you scratch your psoriasis in your sleep to the point where you have to change your pyjamas because there’s blood all over them. Or someone who understands that you don’t want to leave the house today because it’s really bad and you can’t cover it up with long sleeve tops and a bit of foundation anymore.

I finally have an appointment to see a skin specialist at the end of this month (April) where hopefully I will be entitled to the UV treatment. I have been waiting for this day for years!!

Thank you so much for taking your time to ready my story about psoriasis. For all of you beautiful people suffering with the same problem as me, you are not alone in this, we can do this!