Rachel shares her journey with psoriasis including, at one point, relocating to the other side of the world to try and find some relief.

Hello, I’m Rach. I’m 33 and have had psoriasis since I was 16. I was initially diagnosed with moderate to severe psoriasis after going to the GP with what I thought was scarlet fever. It went on to become pretty darn severe; literally all my fingernails fell off and my hair came out by the bagful. The spots also started joining up into huge plaques that split my skin from edge to edge and my ears bled. Awesome. The effect that had on my burgeoning young-adult self was fairly catastrophic. I became self-destructive, withdrawn and miserable.

I went on to have a first round of phototherapy (as well as steroid creams etc) - it was very successful and I enjoyed a longish remission. But after around 12 months the pattern repeated itself. A moderate flare, followed up by a head to toe misery-fest; this time even the insides of my eyelids were affected. Given that I had enjoyed success with UVB I rather drastically thought that moving back to Australia (my childhood home) would be a cunning psoriasis miracle fix - it kind of didn’t work out the way I had pictured in my head - I did not become a radiant, psoriasis-free mega-babe! No. In reality I was still a very, very sore and self-conscious young woman, kidding myself that by leaving the colder climate behind and immersing myself in light I’d escape my condition, my split-open skin, my daily blood soaked sheets and my absolute self-loathing. On reflection, I really just wanted to escape being myself. Essentially all I’d achieved was further withdrawing myself. 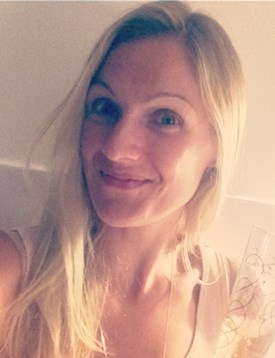 On a trip back to the U.K. around 13 years ago I met a tall, dark and handsome RAF Engineer and that, of course, was that! What luck, thought I! A gorgeous fella loves me for me. I’m in! Cue marriage, house moves, deployments aaaand MASSIVE PSORIASIS FLARES! After 4 more 8 week rounds of UVB treatment, more “oh, are you sunburnt?” comments and endless steroid ointments, creams and scalp applications and 3 hour shower marathons, I said “Rach, get a grip - put on your brave girl pants and look at the next steps!” Which of course meant systemic drugs. I had my chest X-ray, liver tests, blood tests and pee tests, all set and good to go, but then, pregnant! I’ll tell you something - that little belly lodger waved his magic wand and *poof* goodbye psoriasis! For almost 2 years! Then I finished breastfeeding - and guess what?!... More UVB, more “have you burnt yourself?” more creams, then HOORAH! Pregnant again - a happy 2 years remission, aaand the up and down like a fiddlers’ elbow saga continued - enter the motherload of a flare up. This time bringing with it the onset of psoriatic arthritis: joint pain in hands, feet, knees, elbows and hips. Super.

With a husband deployed in Afghanistan, a house move, two little ones to bring up on my own while trying to hold down a job, I made an educated guess that *perhaps* stress might be playing a part?! Duh! And, sensibly recognising that I MUST NOT USE PREGNANCY TO FIX MY SKIN, I cut my hours, I went on a strict diet and, it sort of worked. A bit. Until it didn’t anymore. What now?!

So, around 4 years ago I started on Cyclosporin - amazing results. Relatively few side effects and my skin, for the first time in my life, was beauty magazine clear and I was so happy. Curveball alert! I then got a big scary brain infection, had to come off the medication and so began a slow recovery back to health. 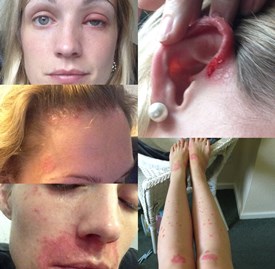 Because I had already taken Ciclosporin for 2 years, that was now off the table and Methotrexate was introduced - I am still on it to date. My journey with methotrexate has been a rocky one - plenty of side effects, most notably extreme fatigue, nose ulcers (delish!) and some hair loss. I also still flare - albeit very mildly. But, and it’s an important but, no joint pain, Yo! And I am as stable as I have ever been - no searing success highs to heart-breaking, soul destroying lows.

There's now a balance I’ve not had before and to look at me now you would not know that I have psoriasis or arthritis. I would like to envisage a future free from medication and of more acceptance of my condition, but that in honesty still feels a long way from now and I accept that. I recognise how much my condition mentally affects me and so for now I am happy to have found a way through it, to not be desperately searching for the next thing, to finally feel beautiful, and moreover to have found the wider online psoriasis community for their openness, frankness, good humour and good grace. Knowing, seeing and sharing that you’re not alone is more uplifting and empowering than I can begin to describe.