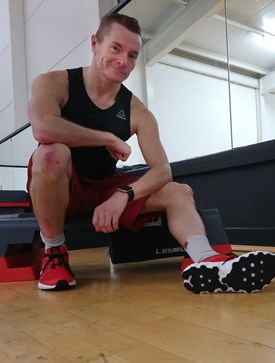 My psoriasis started in my early teens (back in the Eighties) with a patch on my chest which then spread. At the time the GP prescribed Coal Tar ointment. All I can remember is that it didn’t seem to do very much other than stink to high heaven and leave greasy stains on everything. People would ask what the smell was when I entered the room – it was as embarrassing as the psoriasis itself and I quickly stopped using it and refused to go back to the GP.

I would do my best to avoid getting undressed in public or take my top off on family holidays. I didn’t know anyone else that had it, and the only pictures of it I’d seen were extreme cases in library books. I felt like I was the only one and I was ashamed of what I looked like, so covered it up as much as possible. To my relief, as time passed, it slowly faded and I was almost P-free for a few years.

Unfortunately, as I got older it made a slow return… The patch on my chest became bigger and started to affect my scalp, elbows, knees and legs. In the summer it would be great and my P would fade quite a lot and I would happily sunbathe in trunks. But then winter would come and it would make its return.

Initially it was just a few patches here and there, but it seemed to get worse each year and I finally went back to the GP. Though I tried a number of medications over the years, my psoriasis was getting worse. By 2010 I was borderline moderate/severe – with huge patches on my legs, scalp, and arms. Steroid ointments seemed to work, but then it would come back worse when I stopped. It felt hopeless.

As my career/responsibilities progressed, my levels of stress increased. I smoked, drank, ate badly and did little exercise (all potential triggers) but when I turned 39 I decided that something had to change. 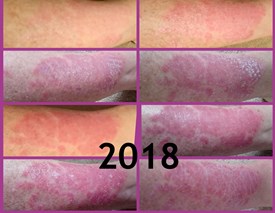 I changed my diet, quit smoking, but most influentially, changed career from working in Financial Services to working in the Fitness industry. This also meant I was exercising more, which is known to help relieve stress, anxiety and depression. This has been a major influence on my psoriasis and has confirmed that the biggest trigger for me was stress. I now enjoy my work, I have a much better work/life balance and my P is a lot calmer.

I was a little self-conscious at first. As a Group Fitness instructor – I can’t hide my psoriasis with long sleeves/trousers – but this has helped me come to terms with my skin. Psoriasis affects my whole body – there are very few places that I don’t have at least a little patch. My lower legs and knees tend to be what most people will spot and I’ll often get asked what I’ve done, as they can look sore and bruised but I’m happy to explain it’s psoriasis.

The thing I find most frustrating is how different it can be on a daily basis, some days it’s hardly noticeable other days it can look like I’ve been scalded – but it’s something that I’m learning to accept. Some days are better than others and I try to manage it as best as I can. Read the latest research and try new creams/treatments.

What works for some, doesn’t for others but not getting too worried about what others think, and knowing that there WILL be days that it’s not as bad/noticeable is what helps me cope.

I hope that by not being ashamed of psoriasis, it will help others feel they don’t need to hide away. In a world of social media filters it’s important to show that imperfections are perfectly normal too.

We are all unique – with so many possible triggers, but also so many things that could help – I would say to anyone, don’t give up. The answer may just be the next thing you try.