Amit's psoriasis journey started in his teenage years. The condition has affected his experience of university and work life, but changes to his lifestyle and medication have led to optimism for the future. 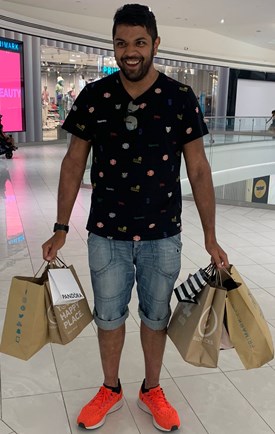 How to begin telling my story? It’s one of ups, downs, highs, lows, and a hell of a lot of itching/ scratching!

I was 14 when I first noticed a patch of skin on my elbow which didn’t look quite right. As a teenager, I assumed it was just a scab which just hadn’t healed properly. It didn’t bother me, so I left it.

When my mum noticed it begin to grow, she began to worry. The doctors didn’t pick up on what it was for over two years. By the time I was diagnosed with plaque psoriasis I was 18, and it had spread badly.

I spent my university years in tracksuit and joggers as my legs were severely affected. I was house sharing at the time and I felt so guilty that the mess around the house was mainly down to me and my flaky skin. I never talked to anyone about it though. I didn’t lead a healthy lifestyle either. I continued to eat rubbish and drink lots of alcohol throughout my three years, which I’m sure worsened my condition. 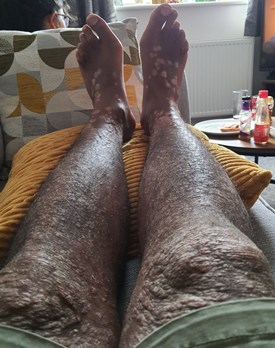 I started taking methotrexate by injection, which worked wonders. I felt myself again! I was able to wear shorts, and I didn’t have to hoover my room everyday anymore. That was until my body got used to the medication after a year or so. My psoriasis came back with a vengeance. I increased the dose, which worked... but again it was for a short stint. I also found my fingers began to swell as well as other aches and pains in my spine and knees.

Summer 2020 was the worst. I was covered in thick plaques. Scalp. Face. Back. Legs. Fully covered. The plaques were so thick and painful that I couldn’t even walk to the end of my street. I couldn’t work. I was off work for 2 months while I healed and tried to get my life back on track by amending my medication.

This was the worst I’ve been. I told myself ‘never again’. 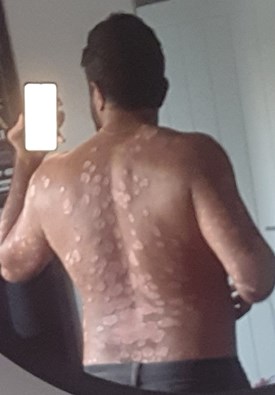 I began taking Acitretin. It was working well but not quite enough, plus I began to notice my hair falling out (it’s a common side effect). I recently started taking biologic injections, specifically Bimekizumab. I’ve seen massive improvements in the last 4 weeks! Although my skin is still discoloured, I had the courage to go to a Spa for the first time in years!

Acceptance is a good place to start any change journey, and I know my journey isn’t over. 15 years have flown by. I have changed my diet massively, reducing dairy, wheat, alcohol and red meat, as I know now that ownership of my condition is on me. I talk about my psoriasis openly now, as I want more people to understand it, rather than just point and stare. My family, and my wife especially, have been so supportive and I cannot thank them enough. My advice to any fellow sufferers is to keep going, keep trying new things, don’t be afraid and stay positive!

The PIF TICK is the only UK quality mark for trustworthy health information.

More than Skin Deep report gets a Parliamentary launch

The event followed the report's publication in February 2022, and helped bring it to the attention of MPs and Peers.