Keith shares his experience of growing up with psoriasis in the 60s, not long after the end of World War Two and around ten years before the Psoriasis Association was founded. 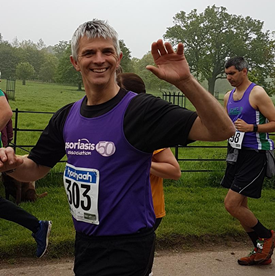 Being born in 1959 means my psoriasis pre-dates the Association by about 10 years and my earliest memories of the condition by about 5.

Having psoriasis in the early 60s was interesting, there was a lot more tolerance and a lot less knowledge of the condition. My memories of those days are that everybody had the same rights and entitlements whoever you were (whether they were applied is a different conversation) but in this millennium we are into identity politics where the only thing that matters is your partial markers (black person, white person, vegan, LGBTQ) and the fact that those thing don't matter because we are all the same has been lost along the way.

In those days (I am now old enough to say that), nobody noticed a skin condition. It was about 20 years after the end of the war, 10 years after rationing ended, and the NHS was just getting started. Health care had all sorts of poverty, war injury and thalidomide related problems to deal with so "a few red blotches" was nothing to worry about (Call the Midwife is a good cultural reference point for Hartlepool at that time).

So while I was subject to the usual playground intrigue, (and I was just as bad with others), there was no malice and we all rubbed along. Apart from Fiona Whitmore, whose genes combined to produce a face so completely perfect she made Lana Turner look ordinary and it almost hurt to look at her. Some girls made her life a misery. It seems nobody escapes the killing fields of the playground.

I have clear memories of going to the doctor’s and him looking over his pince nez glasses, poking my skin and saying "ah scales that turn silvery," getting a big brown book off the shelf, diagnosing psoriasis from the contents and telling me there was no cure. But I could try coal tar soap. Which stank of both coal and tar so, at the risk of creating "double dip" intrigue like the day Nitty Nora (the health visitor) came to the school and publicly took unfortunate kids to the clinic, I declined.

At secondary school a teacher poked my skin (I was getting used to being poked by age 11) and told me that I was infectious and couldn't do sport. I made the case that I would be equally infectious during drama, English and maths so my sentence was reduced to swimming. I remained ‘infectious’ for 5 years but nobody noticed that there was no contagion and I didn't die. To this day I can hardly swim.

A lot of employers offer sick pay but that wasn't always the case so, when my condition was severe and I had to take time off for hospital treatment, I often lost two or three weeks money to compliment (and compound) my discomfort.

However, three weeks of UV treatment in the 1970s meant having a tan when foreign holidays were priced beyond most people and made me appear more exotic than I was. Result.

These days there are a lot of excellent professionals who can prescribe treatments for psoriasis but we live in a world where image, not the person, is important. A rabid need to be selfie ready ensures that every blemish is taken out of context and exacerbates the psychological issues I seem to have missed.

My advice is don't waste your energy on what people think about you - they will think it anyway. If you get a horrible comment it will be from the same person who probably made a similar comment to someone in a hijab minutes before and it says a lot more about them than you.

People call themselves psoriasis warriors, I'm not that brave. I look at my condition as a contest between medical professionals and psoriasis, I am just the field it is played on.

Anecdotally people with psoriasis don't live too well, especially by smoking, but I try to make life easier for the team on my side - I eat well, exercise a lot, do a job I enjoy and volunteer for projects when I can, and it really seems to help both the physical and psychological aspects of a life with psoriasis.

It is my aim to be the oldest surviving person with psoriasis and I hope to set a new PB tomorrow. (boom - tish).