Greg is an actor who plays James Nightingale in the popular soap Hollyoaks, here he talks about his journey with psoriasis and how he was inspired by others who have been shared their stories. 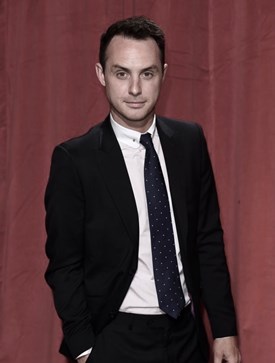 I first remember having psoriasis when I was around 8 years old and I would have to have coal tar baths and wash my hair with Polytar. This went on for several years and seemed to keep it largely in check. It was mostly on my head and whilst I got a fair amount of ‘dandruff’ chat at school it could have been a lot worse. And then it went. I must have been in my early teens. I was delighted!

Fast forward 10 years and it came back with a vengeance. I have no idea why but I started to get patches on my hips. I sought solace in coal tar solutions once more but they had little effect. Then my nails started to form white patches and disintegrate in places. They became painful. I visited a doctor but they couldn’t tell me what it was. I was in a new relationship at the time and it was a blow to my self-confidence. I would apply the solutions at night and the smell was somewhat off putting! I went onto steroid based creams and ointments and that made a difference initially, but as everyone knows who has had to go down that road, in the long term they start to lose their ability to treat it effectively, plus they’re not good for you. 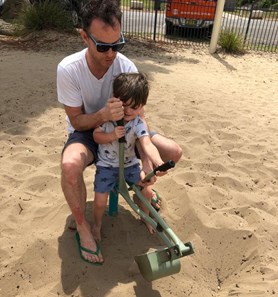 As of now I’ve not actively used a steroid for 10 years. But it’s taken a toll. The patches get bigger all the time and despite trying to make lifestyle changes around diet etc. I don’t seem to be able to get a handle on the problem. I am convinced this is the key to it all though – diet. Not the often asked about stress. Indeed, I had a bout of food poisoning a few years back. I was sick all night and into the next day. That evening I had a bath to warm myself up and noticed that the psoriasis had completely disappeared. Gone, entirely. It was a revelation. I slowly reintroduced food groups into my diet after that, went gluten free, quit alcohol & dairy, but never managed to put a finger on what it is. To my disappointment it came back progressively in the following weeks. 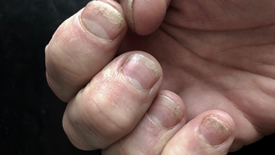 My nail psoriasis was eventually diagnosed by a doctor that was giving me inoculations for a foreign trip – she casually asked if I had nail psoriasis when she was injecting me. “Nail psoriasis? Is that even a thing?” “Yes” she said, it was quite obvious if you knew what you were looking at. “Fantastic” I said, “I can be cured!” “Sorry”, she said, “it’s incurable and we have no idea what causes it.” Brilliant!

Since the psoriasis returned 20 years ago or so now, a lot has happened personally and professionally – I am now happily married and have 3 wonderful boys but the psoriasis has been along for the journey and has gotten progressively worse, more painful and more of a talking point, the more obvious it has become. I now have extremely large patches across my lower legs, on my elbows, my stomach and back and occasionally on my face. It’s difficult doing the job that I do as I am often asked to wear certain clothes or appear in a state of undress, most of which isn’t really an option sadly. Everyone is quite understanding and I’m quite open about it all, I just wish I didn’t have to have the conversation in the first place. It would be great if I could wear shorts on screen without it being an issue, wear a t-shirt without having to have my arms plastered in makeup, but for now it seems unlikely that will happen. I live in hope that there will be a breakthrough that fully understands the causes so a fully effective treatment can be developed. I also hope it will become more common to see skin issues like this represented in print media and on TV.

I felt compelled to share my own story and set aside the trepidation I have in baring my own skin after seeing the bravery of people who have shared their stories already and the courage to get their skin out and not let the psoriasis dictate how they feel about themselves, what they wear or what they do. Much love to you all and keep doing what you are doing! G x